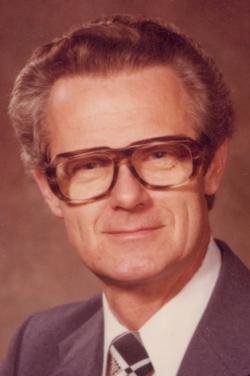 12:10 pm - 12:00 am
Cathedral of the Immaculate Conception
New Brunswick, Canada

Surrounded by loved ones, E. Ronald Horgan died peacefully in Turnbull Nursing Home on Saturday, May 19th, 2018. He was born in Saint John, New Brunswick on September 25, 1928 to the late William Joseph and Catherine Agnes (Gogan) Horgan. Ronald was predeceased by his wife, Eva Elizabeth (McDade) Horgan (2015) as well as his two brothers, James Michael (Jim) Horgan (1966) and William Joseph (Joe) Horgan (1986). He is survived by his daughter Angela Burke (Gregg) and two grandchildren, Andrea and Christopher, all of Calgary, Alberta. Ronald is also survived by his sisters-in-law, Eleanor (Little) Horgan of Saint John and Patricia (McDade) Kennedy of New York and many nieces and nephews. Ronald was a scholar, an educator, a lector, a hobby chef and a great friend to many people. He enjoyed entertaining, dancing and having a good game of bridge. Ronald taught in the Saint John school district for many years and was instrumental in the development of the Student Co-op Program at Simonds High School. Ronald was an inspiration to his family, friends and many students. He just always knew the right thing to say and always left a huge impact on you. Ronald was very proud of his two grandchildren and took a keen interest in their lives, as well as the lives of his close nieces and nephews. He was a man of great faith and a life long parishioner of The Cathedral of Immaculate Conception. He was a member of the Knights of Columbus and a member of the Retired Teachers Association. Ronald served on many committees and boards in the community with special attention to the Cathedral. He played a significant role in the leadership and fund raising of the Cathedral Restoration Project back in 1985. The family wishes to extend their gratitude to all those who assisted and cared for him in the past few years. A special thank you to care giver, Betty for her years of service and to the Staff of Turnbull Nursing Home who provided care, joy and compassion. Visitation will be held at Brenans Funeral Home, 111 Paradise Row, Saint John, NB (634-7424) on Tuesday May 22nd, 2018 from 2pm - 4pm and 6pm - 8pm. A Mass of Christian Burial will be celebrated at the Cathedral of the Immaculate Conception at 12:10pm on Wednesday, May 23rd, 2018 and the interment will follow at a later date. For those who wish, in lieu of flowers, donations can be made in Ronald's memory to The Cathedral Restoration Project, Alzheimer Society or to the donor’s choice.

Share Your Memory of
Eugene
Upload Your Memory View All Memories
Be the first to upload a memory!