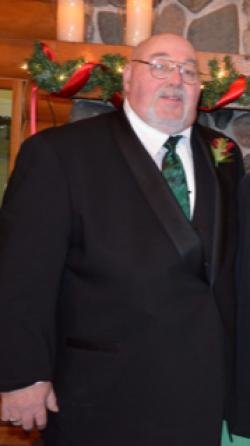 With heavy hearts and appreciation for a life well-lived, the family of Bob Galbraith, husband of Christine (Ricketts) Galbraith, announce his passing on Monday, May 28, 2018 at the Saint John Regional Hospital. Born September 2, 1955 in Saint John, he was a son of M. "Fern" (Mabee) (Galbraith) Dawson, and the late Robert Clement Galbraith. Bob was very active in coaching minor baseball and minor hockey in the Saint John area for many years. He was an avid Seadogs and Saint John Alpines fan, and will be missed by his family and many friends. In addition to his loving wife of 45 years, Christine, Bob is survived by his daughter, Andrea Galbraith; sons, James Galbraith (Misty) and Robert "Bob" Galbraith; grandchildren: Jacob, Rebekah, Scott, and Kristyanna; sisters, Jane Barry (Jim) and Susan Galbraith (Colin Smith); brothers, Danny Galbraith (Penny Martin) and Tommy Galbraith (Mary Anne); and several nieces and nephews. He was predeceased by his father, Robert Clement Galbraith. Resting at Brenan’s Funeral Home, 111 Paradise Row, Saint John (634-7424), with visiting on Wednesday, May 30, 2018 and Thursday, May 31, 2018 from 2 to 4 and 6 to 8 pm. A funeral service will be held on Friday, June 1, 2018 at 12 noon from Brenan’s Funeral Home Chapel. Interment will follow in Ocean View Memorial Gardens. For those who wish, remembrances to A Living Memorial or a charity of the donor’s choice would be appreciated by the family.