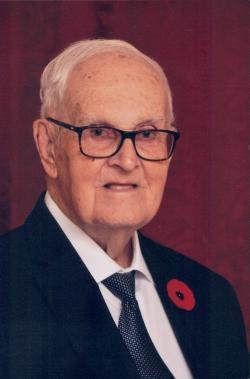 It is with appreciation of a life well lived, that the family of John Ralph Andrews, husband to the late Olive May Heans, grieve for his passing, which occurred on Friday, August 31, 2018 at Ridgewood Veterans Wing. Born on September 10, 1922, he was a son to the late David and Stella (Capson) Andrews. Ralph was a World War II Veteran serving overseas as a Staff Sergeant with RCEME. After his career with the Canadian Armed Forces, he became an Embalmer and Funeral Director. Ralph was employed with Brenan’s Funeral Home for nearly 25 years. During his time as a Funeral Director, he assisted in the development of the first embalming school in Moncton, NB. He also served as Secretary and Treasurer for the New Brunswick Funeral Directors and Embalmers Association. When his career as a Funeral Director came to an end, he was then employed with NBCC for 12 years. Ralph was a proud Mason. He was a past Grand Secretary for NB and an Honorary Grand Master. He was delighted to receive his 70 years Pin last year. Ralph was a man of faith. He was an Elder Imeritus of the Grace Presbyterian Church, having previously served as Clerk of Sessions and participated in many activities in the life of the church. Ralph loved music and played the trombone with the Saint John Fusilier Band and St. Mary’s Band. He was also honoured to receive the Queen Elizabeth II Golden Jubilee Medal. Ralph will be dearly remembered by his son John (Linda) Andrews, his special cousin Helen Humphreys, many nieces, nephews and members of his extended family. John and Linda would especially like to thank Cathy Walton and her husband George, whose excellent care enabled Ralph to remain in his own home until he entered Ridgewood. They also appreciate the wonderful care and compassion he received from the doctors, nurses and staff of Ridgewood Veterans Wing. Ralph enjoyed his visits with Rev. John Martin, Rev. Philip Lee and good friend Jim Shaddick. Arrangements are under the care and direction of Brenan’s Funeral Home, 111 Paradise Row, Saint John (634-7424) where visitation will take place on Wednesday, September 5 from 2-4 and 6-8. NB Lodge No.22 will be conducting a Masonic Service on Wednesday at 6:30 PM. A Funeral Service will take place on Thursday, September 6 at 11:00 AM at Grace Presbyterian, 101 Coburg Street, with interment taking place at Fernhill Cemetery. For those who wish, remembrances may be made to Grace Presbyterian Church.