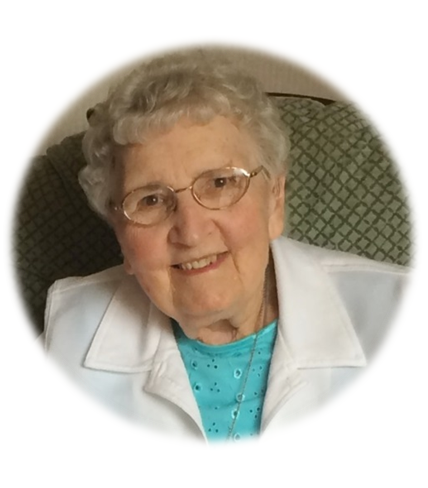 Sister Angelina Agnes Martz (Sister Eleanor Marie) died peacefully at Ruth Ross Residence on August 31, 2019.  Born in Strome, Alberta, she was the daughter of the late John Henry Martz and Eleanor Engel.  On January 6, 1942, along with her two sisters Theresa and Margaret, she entered the Sisters of Charity of the Immaculate Conception in Saint John, NB.

After Novitiate, profession of vows and receiving her NB Teachers’ License, she began her teaching career.  She taught in Farrellton, QC and Moncton, NB.  In 1960 she began her extended years of teaching at St. Vincent’s High School in Saint John where she became the Math Department Head.

After 41 years of teaching, she became the Social Justice Co-coordinator for the Sisters of Charity.  She had a strong belief in the Social Teachings of the Church and was devoted to those who were vulnerable and marginalized.  She also conducted many workshops on social justice.

She received many awards, including the YMCA-YWCA Peace Medal in 1998 and honourary membership from the Saint John and District Labour Council in 2003.  She was Chairwoman of the Ecumenical Committee 2000 and Co-coordinator of KAIROS in 2003.  In 2009 she received the Maude Barlow Founder’s Award from the Council of Canadians as well as the Seton Legacy of Charity Bicentennial Medal from the Sisters of Charity Federation.  In 2012 she received the Queen Elizabeth II Diamond Jubilee Medal and in 2014 she was given the John Peters Humphrey Human Rights Award in Hampton, NB.  In 2012 and 2017 she was given Certificates of Honour from Development and Peace-Caritas Canada.  Sister Angie also attended the United Nations Forum as a member of the Sisters of Charity Federation NGO’s.

Anyone who met Sister Angie knew of her passion for social justice and her care for creation.  She had a wide circle of friends from all walks of life and tradition and she will be deeply missed.

Arrangements are under the care and direction of Brenan’s Funeral Home, 111 Paradise Row, Saint John (634-7424).

Donations may be made to the Saint John Community Loan Fund, Development and Peace-Caritas Canada or the charity of choice.

Share Your Memory of
Sister Angelina
Upload Your Memory View All Memories
Be the first to upload a memory!
Share A Memory