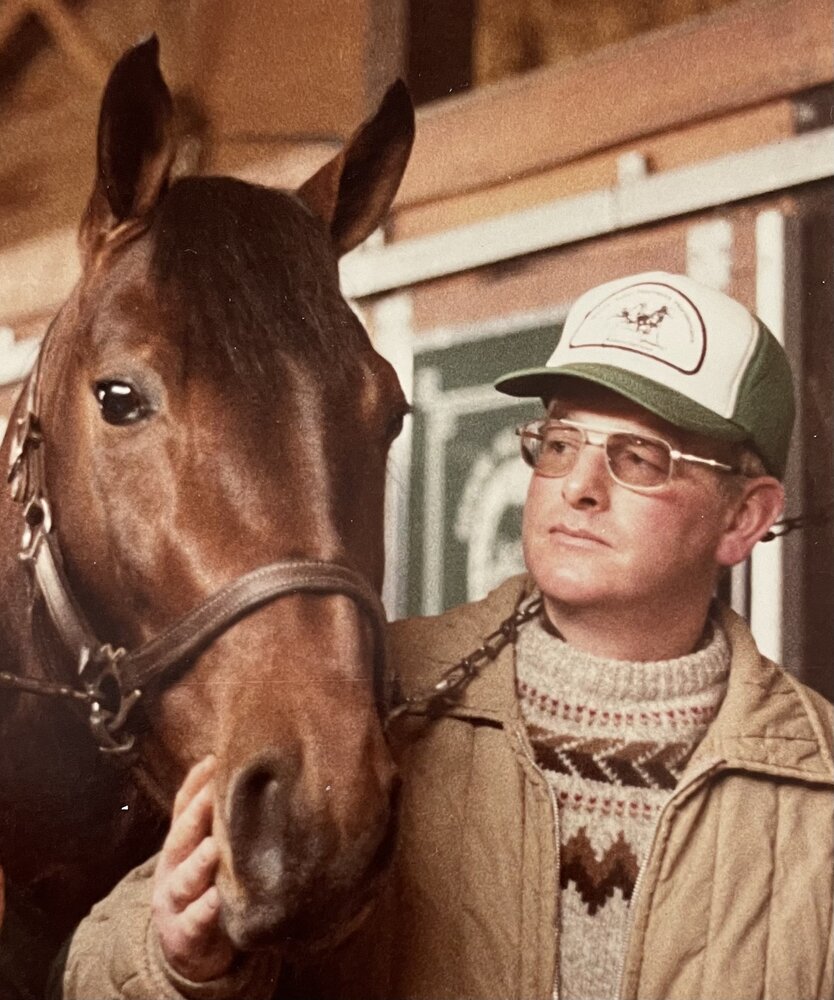 “Donnie” had an accomplished career as a Standardbred (harness) horse trainer, developing dozens of top-class racehorses, stakes winners and champions. He was widely recognized and respected as one of the region’s top trainers.

As a young man, he learned his first lessons in horsemanship from the late Currie Wood in Saint John, and then from Hall of Fame Trainer/Driver Dick Buxton and NB’s Tom Scovil while working in the United States. He absorbed the lessons learned from these top horsemen, and they had a lasting impact on the rest of his career.

Returning to Saint John after two years in the U.S., he established his own stable at Exhibition Park in 1962. Donnie kept an immaculate barn, his horses were well looked after, and always competitive.

Through his career, he developed deep and long-lasting relationships with a small number of owners, most notably Gerry Lowe’s Gemini Hills Stable, Don and Willard Jenkins and Hughie Fitzpatrick. He developed many top horses for his owners, but more importantly, friendships which lasted for decades.

Donnie won nearly every Maritime stake race on multiple occasions, along with many of the region’s Invitational and Free-for-all races, with many track-record performances.  Celebrated as “Trainer of the Year” many times at his home racetracks, he was twice nominated on the national level as Canada’s “Trainer of the Year” for his commitment to excellence and expertise in selecting, and then developing, young horses into top performers.

A modest man, he was always quick to attribute his success to the owners who entrusted him with good horses, along with the skill and hard work of the grooms and drivers who worked for him.

Some of his notable performers over the years were Gemini Risk, Courtney Bay, Uta’s Smokey, Gemini Gazelle, Dexter’s Lion, Gemini Jewel, Keen Andy, Rapid Bye Bye, Harold’s Son, Medina Lobell, and June Jackson, along with many others too numerous to mention.

In addition to his wife Carol, Don is survived by his children: Ross (Krista) and Greg (Shawn); and his grandchildren: James Galbraith, John Galbraith, Ashley (Ian) Morrison, Alex Galbraith, and Caitlyn Galbraith; as well as several nieces, nephews, and friends.

Besides his parents, Don was predeceased by brothers: Robert, Edmond, John, and Everett.

The family would like to thank the staff of St. Joseph’s CAM Unit (5th floor) for their compassion and care of Don. Your kindness will not be forgotten.

Arrangements are under the care of Brenan’s Funeral Home, 111 Paradise Row, Saint John (634-7424). In keeping with his wishes, a private interment has taken place in Ocean View Memorial Gardens. For those who wish, remembrances to the St. Joseph’s Hospital Foundation, Alzheimer Society, or Diabetes Society would be appreciated by the family. Please place online condolences and remembrances at www.BrenansFH.com.

Share Your Memory of
Donald
Upload Your Memory View All Memories
Be the first to upload a memory!
Share A Memory