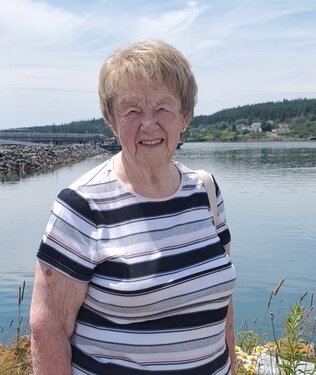 It is with sorrow the family of Shirley Jean Smith announces her sudden and unexpected passing in Palm Harbor, Florida on January 6, 2022.   Born in Saint John on March 20, 1936, she was the only daughter of the late Frank A. and Hazel V. (Verner) Hicks.

Shirley never knew a drive on the highways and byways that she didn’t love to take, especially with Melvin at the wheel.  She spent many a happy day on the roads up and down the East Coast and in ‘snow bird land’ with Sharon and Kevin after Melvin’s passing.  Shirley was a care-giver extraordinaire to her parents as they moved into their twilight years, and she lived for that life role.  Nor could you ever take a good shopping day away from Shirley and her pals, hunting ‘the stores’ for the next deal and gossip and laughs over lunch.  To those of you who made her days bright over the years since Melvin’s passing with phone calls, laughter and catch-up; please know that she was forever gladdened to hear the phone trill.

Shirley was predeceased by her husband and constant companion, Melvin.  She is survived by her only daughter, Sharon Smith (Kevin) of Saint John.

Arrangements are under the care and direction of Brenan’s Funeral Home, 111 Paradise Row, Saint John, NB (634-7424).  In honouring Shirley’s wishes, there will be no visitation or funeral service.

For those who wish, remembrances in memory of Shirley may be made to Bobby’s Hospice, the Saint John SPCA Animal Rescue, the Brain Tumor Foundation of Canada, or to a charity of one’s choice.

Online condolences may be placed at www.BrenansFH.com.