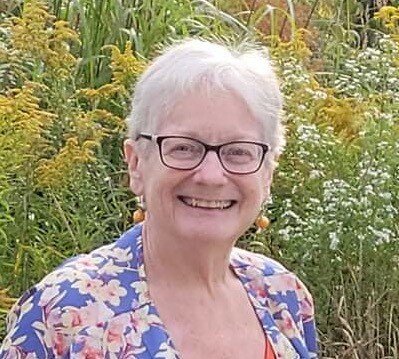 It is with great sadness that Joanne’s original family, her other family (Michael, Cynthia, Andrew, Sarah, and Matthew Doyle) and her lifelong friend, Phyllis Knox must announce to all her friends and acquaintances, the event of her death on Tuesday, January 18, 2022. She passed while in the competent, respectful care of the staff of Bobby’s Hospice.

Joanne had a rich and varied life. She began her study of the church and choral music at age 8 under the tutelage of Gerald Wheeler at the R.C.S Summer School, in the particular art of the Sung Psalms and Canticles.

She made her stage debut at age 12, 13, on the big stage of The Acadia Summer Playhouse in Carousel, Carnival, South Pacific, and Once Upon a Mattress with her sister Jane in The Pit. By high school she was a Pistol in Annie Get Your Gun. After high school she joined the first all-female combat unit in the Canadian Reserve Army having conferred on her the rank of 2nd Lieutenant by The Governor-General. Then to Montreal to the Performance Art Training at the Opera Workshop and Theatre Arts at McGill, beginning also at that time to study yoga.

Over the next 18 years in Montreal, she was an organist and choir director at many churches, a singer in many many productions, director of many musicals, a teacher at Concordia University and at Kee Music Inc, founded by sister Jane where all singers worked on their vocal production, rock & roll singers, jingle singers, Cantors and Priests, opera and lieder singers, spontaneous translators from the U.N, radio and T.V announcers and choir work.

She studied yoga in Montreal and at Kripalu in Mass. And taught for The Occidental Spiritual Association during winter in Montreal and at their summer country retreats. She also organized creative plays and skits for which her “Bruce on a Bus” will never be forgotten. She was a choir member of the Original Baroque Choir led by Christopher Jackson, “Musique Ancienne de Montreal”.

When dad died in 1991, Joanne left her life in Montreal to come home to become her mother’s roommate, companion, and caretaker. You could find them at anytime at any tea house, concert, in church and wandering all the back roads of New Brunswick watching birds, wildlife and the joys of the changing seasons and every summer on their vacation in Grand Manan.

In Saint John she plied her considerable talents by teaching yoga, being an adjudicator for the N.B and N.S, festivals of music, teaching voice to children and adults and singing with many groups including The Friends of Music, The Sopranos, Oceana, Opera New Brunswick, and the N.B Symphony in productions like The Messiah. She was an organist and choir director and several churches. She had spent 4 months being an apprentice to a Ferrier so on her many visits to Jane’s Farm she cleaned all the horse’s feet and often handled the whole farm on her own. She loved all animals and was competent with them.

She and mom were great swimmers and swam at Ann and Don’s cottage on the Belleisle, at Jane’s cottage on Panmure Island, PEI and off the end of Graham’s sailing sloop in Vancouver. She swam the lakes of Quebec, the rivers of N.B and the ocean on both coasts. She had one swim to do, she had to cross the wide, wide River Jordan and she did.

Arrangements are under the care and direction of Brenan’s Funeral Home, 111 Paradise Row, Saint John, NB, (634-7424) Interment will be held at a later date in Erb’s Cove Baptist Church Cemetery. Donations may be made to Bobby’s Hospice, Salvation Army, The SPCA of Saint John, or War Amps of Canada. Online condolences may be made to www.BrenansFH.com

Share Your Memory of
Joanne
Upload Your Memory View All Memories
Be the first to upload a memory!
Share A Memory