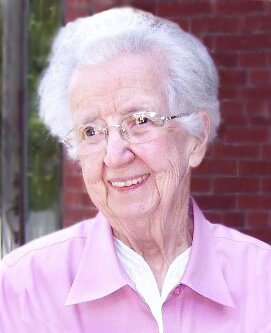 Sister Patricia Frances Riley (Sister Mary Norah) peacefully went home to her loving God on January 27, 2022 at Ruth Ross Residence in Saint John, NB.  Born in Johnville, NB on April 19, 1919, she was the daughter of Charles and Norah (Pickard) Riley.

Sister Patricia taught in the New Brunswick public school system until she entered the Sisters of Charity of the Immaculate Conception on December 8, 1948.  She generously shared her giftedness as an educator with so many students and in several schools over the years, including St. Dunstan’s in Fredericton, NB (1950-1968), Holy Trinity, St. Joseph’s and St. Patrick’s in Saint John.  Sister Patricia was also missioned to Vancouver, BC to teach at Notre Dame High School and St. Francis of Assisi School until her retirement.

She was loved and respected not only as a dedicated educator, but also as a compassionate presence in her Pastoral Care ministry at St. Vincent’s Hospital in Vancouver, Holy Family Hospital in Prince Albert, SK, and lastly, at the Saint John Regional Hospital until 1994.  She continued her ministry of hospitality, caring for the Sisters and guests at St. Vincent’s Convent on Cliff Street until moving to Ruth Ross Residence.

Known to many as “Sister Pat” (to her family as “Trish”), she brought gentleness and acceptance wherever she went.  Her steadfast faith in God supported her throughout life, and her family, community and friends were always assured of her support and prayer.

Sister Pat was intensely proud of her Irish heritage and her Johnville roots.  The mere mention of the Johnville picnic and dancing at Tara Hall would bring a smile to her face and an accompanying infectious laugh.  She would often tell the story that she came to the Sisters later in her life because “I wasn’t done dancing!”  Go now in peace faithful friend of God.

Survived by her sister, Celine Calhoun of Saint John.

A graveside service will take place in St. Joseph’s Cemetery, Saint John on Wednesday, February 2, 2022 at 2:00 PM.   For those unable to attend, the service will be livestreamed and can be viewed by visiting Sister Pat’s obituary on the Brenan’s website.  Arrangements are under the care and direction of Brenan’s Funeral Home, 111 Paradise Row, Saint John (634-7424).

Share Your Memory of
Sister Patricia
Upload Your Memory View All Memories
Be the first to upload a memory!
Share A Memory