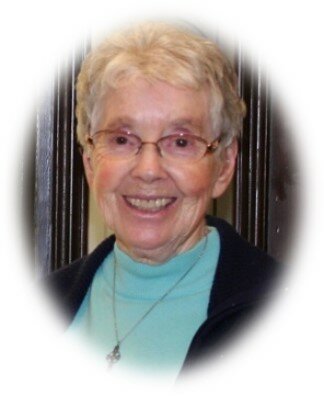 Born on February 22, 1927, in Fredericton, NB, she was the daughter of Charles and Anne Bridget (Grasse) McSheffrey.  She entered the Sisters of Charity of the Immaculate Conception on December 8, 1945.

Sister Grace’s early ministry was in education, teaching in St. Stephen, Bath and Minto, NB, as well as in Saint John at St. Joseph’s and Holy Trinity Schools and Sacred Heart School in Vancouver, BC.  Spending most of her years at St. Joseph’s (1953-68) teaching Grade 3, her students knew her as a creative and vibrant teacher, encouraging them in the Arts, especially drama, dance and music, annually preparing them for the New Brunswick Music Festival.  Sister Grace was also a lively storyteller, ending each day with a story, sometimes embellished with exciting detail, and a promise to continue it the next day.  Her storytelling gifts continued throughout her life as she told tales about her hometown of McAdam.

After she retired from teaching, Sister Grace moved West and was a Parish Assistant in Lloydminster, AB, working in Adult Faith Development.  She returned East and began her ministry as a Spiritual Director and Pastoral Counselor in Saint John, Fredericton and Moncton, NB.  She facilitated workshops and groups at Villa Madonna Retreat House and in parishes, with an emphasis on Understanding Dreams, Healing Life’s Hurts, and Non-Violent Communications.

Sister Grace possessed tremendous energy and enthusiasm for life, living each day with a positive attitude and delightful sense of humour, finding the best in each person.  She listened with compassion and offered gentle encouragement to those seeking a deeper meaning in their life.

Predeceased by her parents, Charles and Anne and brother, Ronald.

Survived by her sister, Theresa Egan of Littleton, Colorado.

A graveside service will take place in St. Joseph’s Cemetery, Saint John on Wednesday, February 16, 2022 at 10:00 AM.   For those unable to attend, the service will be livestreamed and can be viewed by visiting Sister Grace’s obituary on the Brenan’s website.  Arrangements are under the care and direction of Brenan’s Funeral Home, 111 Paradise Row, Saint John (634-7424).

Share Your Memory of
Sister Grace
Upload Your Memory View All Memories
Be the first to upload a memory!
Share A Memory