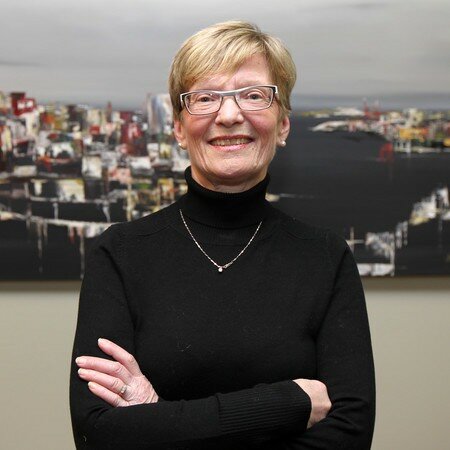 On November 8th, 2022, at 5:30pm a fire went out. Catherine Mary Hurley MBA, FCPA, FCA, passed away peacefully at the Saint John Regional Hospital, surrounded by her family. Cathie was born in St. John's, Newfoundland and Labrador, to the late John and Elizabeth (née McCarthy) Hurley on September 7th, 1953. The fifth of six children, Cathie was raised in a warm home with a strong, loving family. After occupying the president of MUN's office during a student protest, she moved to New Brunswick in 1973 where she earned a BBA and later an MBA.

In addition to being an entrepreneur, chartered accountant, and accounting system consultant, Cathie worked at UNB's Faculty of Business for nearly 20 years. Beginning as a lecturer and retiring after serving as Director of Undergraduate Studies, Assistant Dean - International Programs and External Academics, and Senior Teaching Associate, Cathie poured her expertise and vigor into countless committees and the university Senate. She spoke fondly of her many years promoting culture, literature, and the arts through her service as Treasurer and Chair of the Lorenzo Society. Another favourite focus was promoting the university internationally, leading the development of partnerships and programs with institutions around the world. An advocate for education in the community, she fought to prevent the conversion of Millidgeville North school into a call centre, and to preserve the status of the University in Saint John.

An avid volunteer, Cathie served on many boards and commissions, especially in support of sports and recreation in Saint John and throughout New Brunswick. She was a driver in introducing electronic timing to both track and field and speed skating, and devoted many hours as an organizer and timing official at sporting events throughout the province.

In her private life, she took pleasure in travelling abroad, British television mysteries, and puzzles of all sorts. She hosted countless lively dinners for family and friends and was happiest in a crowd of excited debate around the supper table. She loved to spend time with her husband and children and, most recently, to dote on her grandson. She will be missed by her canine companion, Max.

A celebration of life will be held on Wednesday, November 16th, at Lily Lake Pavilion from 4-7pm. Formal speeches will begin at 4:30pm. In lieu of flowers, in memoriam donations can be made to the Canadian Liver Foundation, the Saint John Regional Hospital Foundation, the New Brunswick Public Libraries Foundation, the Brighten Group, or a charity of the donor’s choice. Online condolences may be placed at www.BrenansFH.com

Share Your Memory of
Catherine
Upload Your Memory View All Memories
Be the first to upload a memory!
Share A Memory